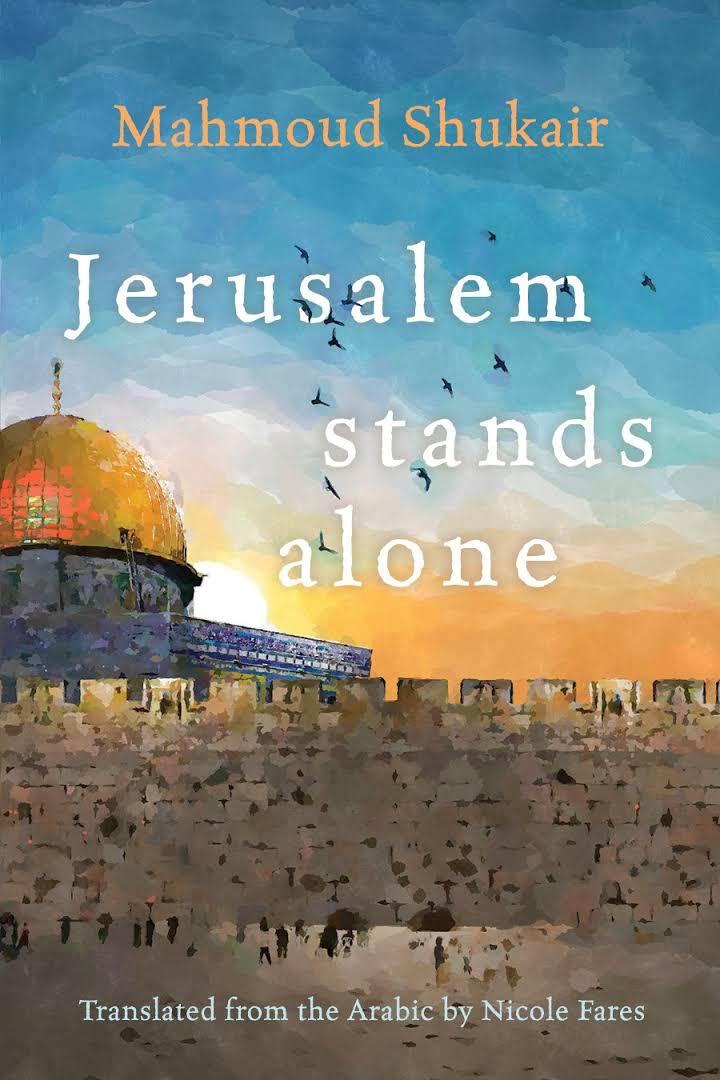 Space, silence and encroachment intertwine, while a prevailing solitude emanates from the pages of Mahmoud Shukair’s novel ‘Jerusalem Stands Alone’, translated by Nicola Fares and published by Syracuse University Press. The title itself is an intense metaphor that is felt throughout the book. Jerusalem is alone and its inhabitants navigate the space between community relations, individual fears and the new presence of five Jewish settlers; the latter synonymous with settler colonialism and Palestinian forced displacement.

In a series of fast paced vignettes, Shukair imparts insight into everyday life in Jerusalem against an unfolding backdrop of simmering political repression and violence. The reader is introduced to Abd El-Razzaq’s family. Abd el-Razzaq is married to Khadija and their two sons’ presence in the book is reinforced with their absence: one son is in prison and the other abroad, on the premise of seeking an absconded love. Together with their daughters Rabab and Asmahan, life in colonised and occupied Palestine is shown as shifting between the mundane, the personal and the tragic – the latter constitutes an intrusion into an otherwise ordinary life.

The book is interspersed by other minor characters and dominated by the narrator’s presence, whose observations and later inclusion in Abd el-Razzaq’s family through his marriage to Rabab, entices the reader to delve into Jerusalem’s history and present through his knowledge. Rabab, twenty years his junior, is a gentle yet passionate presence. Their interaction with Jerusalem, captured in slivers of reminiscing, reading, observation and love, sets them apart from the rest of the characters portrayed in the book.  All the characters are ultimately affected by the violence of settler-colonialism, yet Rabab and the narrator, who remains anonymous throughout the book, have established themselves as both participants and observers of the city.

Shukair’s poetic narrative brings out the depth of emotions portrayed in this book as fleeting moments. At times, the impending chaos is held at bay, as elements of nature and intimacy rush to the fore: “Rain outside, warmth in the bed.” Yet, within a few pages of such emotional interludes, the reader faces another reality – one which pushes the Palestinian protagonist family to the sidelines in order to depict the settler agenda and ideology: “They look at the house like it’s the only thing they see.”

From settlers to settler violence and military presence, the ordinary in Jerusalem is disrupted, so much that each detail becomes an important remembrance, no matter how trivial. The persecution of Palestinians is constantly implied as a tangible occurrence or a looming threat personified by the Israeli police chief ,Yoram, while Palestinians subjected to such violence are coerced into constructs of violence as a part of their everyday life, despite the abnormality of normalising such violence.

Shukair’s metaphors of displacement are powerful. Almost midway through the book, we are told, “The soldiers stood in front of our house, until evening, rooted like old trees.” The words hurt – the laceration they leave behind is as intense as Palestinian collective memory. Zionist military presence is a reminder of the paramilitaries and their successors which continued the cycle of forcibly displacing Palestinians. They have no roots in Palestine, yet their presence is magnified to match that of the trees; the difference being the military presence having uprooted the Palestinian connection to their land.

Fear prevails in different forms. Asmahan’s fear at seeing her brother rearrested in the middle of the night caused her to wet herself. Khadija’s wish to see her estranged son leads her to hallucinations. Her husband is unable to connect to this manifestation in which his wife is a participant.

Meanwhile, Rabab and the narrator are ensconced in Jerusalem’s collective realm, yet they are set apart from the rest due to their intense emotional and intellectual connection. Fear is experienced and ruminated upon, never far from their consciousness. Of Rabab, the narrator states, “She stares vacantly at the lights coming in through the window from the settlements spreading north and south, east and west and whispers, “I’m afraid”.

Jerusalem stands alone, yet it is amalgamated into the soul of each protagonist. Their connections are largely determined by their experiences, kinship ties, memory and social class. Shukair explores solitude as a phenomenon that can also find a strong connection in another who emanates the same affinity. External threats are changing Jerusalem and the lives of its Palestinian residents, yet deep in each heart there is a carefully guarded space that holds the land in love and sacredness.

It is the remembered land, the Jerusalem that withstands all despite settler presence and violence, that reverberates throughout the book. Shukair’s attention to memory and how this is cherished and expressed, seamlessly connecting land and people, deserves a special mention. The entire book is a call for readers to immerse themselves into affinity, like Rabab when she announces, “I’m going to wash myself as this city washes itself in the rain.”